Ananda Yoga Guru Kula Yoga Therapy Training offers a unique opportunity to study with a variety of leading professionals in the field of Yoga Therapy. We have hand-selected our faculty for expertise in their respective speciality and their ability to impart this knowledge through their teaching.
Jnani Chapman, RN, BSN, CMT

Jnani received her Bachelors of Science degree in nursing at the University of San Francisco and has for fourteen years served as senior staff member of Commonweal Cancer Help Program (which was featured in Bill Moyers' PBS special on health and healing.) Jnani also teaches yoga to women with breast cancer through the Breast Cancer Personal and Lifestyle Support Program of the University of California, San Francisco, and the California Pacific Medical Center. She is the former executive director of the International Association of Yoga Therapists.
Antonio Sausys, BA (Psychology), MA (Somatic Psychotherapy), CYT

Antonio Sausys is a somatic health practitioner and yoga instructor specializing in one-on-one yoga therapy for people with chronic and acute medical conditions as well as emotional imbalance. He studied with Yoga masters and teachers such as Indra Devi, Swami Shankaradevananda, Swami Ekananda, Babashi Singh, Ram Dass, Swami Mairtreyananda and Larry Payne. He has continued her professional development with training in Foot Reflexology, Swedish Therapeutic Massage, the Degriefing Process and Reiki. Antonio teaches and lectures at U.C. Berkeley, California Institute of Integral Studies, Alive and Well, Institute of Conscious Body Work, College of Marin, has been a faculty member at the International Yoga College and the former Honorary Secretary of the International Yoga Federation for USA. Antonio resides in Marin County with a thriving yoga practice throughout the Bay Area.
Richard Miller, PhD

Richard Miller, PhD is a clinical psychologist, author, researcher, yogic scholar and spiritual teacher. For over 40 years, Richard Miller has devoted his life and work to integrating the nondual wisdom teachings of Yoga, Tantra, Advaita, Taoism and Buddhism with Western psychology. Among his mentors were Jean Klein, T.K.V. Desikachar and Stephen Chang.

Richard is the founding president and CEO of the Integrative Restoration Institute, co-founder of The International Association of Yoga Therapy and founding editor of the professional Journal of IAYT. He is also a founding member and past president of the Institute for Spirituality and Psychology and a senior advisor for the Baumann Foundation for the study of Awareness and its impact on well-being.

Deborah has been practicing chiropractic since 1975 and teaching yoga since 1985. During these years, the two practices have evolved together and informed and enriched each other. Her teaching is motivated by a strong desire to share experiences with other students and teachers and to continue to learn about the human body and mind. She finds the principles of yoga extremely therapeutic and healing to people of all ages. She continues to practice chiropractic in Healdsburg and to direct the Healdsburg Yoga Studio. She has taught anatomy to chiropractic students, naturopathic students and yoga teachers. Her purpose in teaching is to create classes that are intelligent, enjoyable and accessible to everyone.
Sarasvati Buhrman, PhD, RYT 500 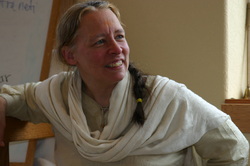 Sarasvati has maintained a private practice of Ayurvedic medicine and Yoga Therapy since 1987, and is senior teacher and co-founder of the Rocky Mountain Institute of Yoga and Ayurveda. She did graduate work in genetics and received her doctorate in medical and psychological anthropology from the University of Colorado. She is also a certified biofeedback therapist and Cardiac Yoga instructor. A Yogic renunciate in the Vairagi order of north India, Sarasvati has practiced and taught asanas, pranayama, meditation and Ayurveda under the direction of her guru, Baba Hari Das, since 1976. She was trained in Ayurvedic medicine and asked to practice and teach by prominent Ayurvedic Physician, Dr. R.P. Trivedi. She has published several papers in the fields of Yoga, Ayurvedic Medicine, and Yoga Therapy.
Shar Lee, RYT 500

Shar Lee has been practicing and teaching yoga for over 30 years, in the USA and internationally in India, Scotland, Nepal, and Brazil. She was one of the first students to train and become certified in Structural Yoga Therapy, under the direction of Mukunda Stiles, and later became a Structural Yoga Teacher Trainer. She specializes in Anatomical, Therapeutic, and Ayurvedic Aspects of Yoga Asana and Yoga for Women, and is co-author of Doubles Yoga. A devotee of Ammachi, Shar has studied for many years in Nepal and is a certified Tibetan Cranial-Sacral Practitioner, a massage therapist, and a practitioner of Ayurvedic Marma Point Therapy.
Avadhutiika Ananda Deviika Ma, Acharya, MSc, E-RYT 500

Ananda Deviika’ Ma graduated from the University in Belgrade, in Yugoslavia , with a degree in Theoretical Physics, which inspired her to further her research in the domain of spirituality. She received her spiritual initiation in 1977 and decided to dedicate her life to serving others as an Acharya, or spiritual teacher. She became a Sannyasini, or yogic nun, in the Northern Indian Tantric tradition under the guidance of her Guru Shrii Shrii Anandamurti. She spent three years training in India and then came to the United States and Canada where she has taught many people the practices of Sahaj yoga. She is a Co-Founder and the Training Coordinator of Ananda Seva Mission, a trainer of family Acharyas, and a Co-Director of the ASM Yoga Teacher Training.
Gayatri Shelton-Ostadi, E-RYT 500, Yoga Therapist

Gayatri's study of classical yoga began in her twenties. In the ensuing decades asana, meditation and spiritual practice have grounded her life. Her interest in the physicality of asana can be traced to her early years as a professional modern dancer. Her intense willingness to bring awareness to the sensations of asana can be traced to her lifetime immersion in the Diamond Heart work of AH Almaas. Gayatri is a Yoga Therapist and came through the Ananda Seva Yoga Teacher Training herself and has labored in love as she has spent over 3000 hours teaching asana to students.